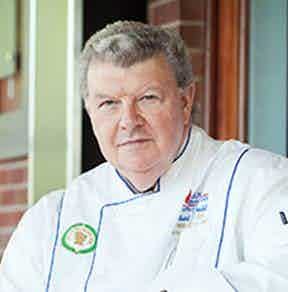 After nearly 12 years with Sullivan University, Chef David Dodd has been named executive director of the National Center for Hospitality Studies (NCHS) at the Louisville-based culinary school. Previously director of NCHS, Dodd will now oversee all food and beverage operations at both Louisville and Lexington campuses as well as all aspects of NCHS including The Bakery at Sullivan University retail and wholesale operations, Juleps Catering, and Winston’s Restaurant.

“I’m delighted for this new opportunity and challenge,” said Chef Dodd. “Having spent more than a decade working with students at NCHS, I look forward to enhancing their experience and getting more involved with the business side of the program with The Bakery, Juleps and Winston’s.”

Prior to joining NCHS in 2002 as the chair of the weekend and evening program, Chef Dodd worked as the corporate chef for Gourmet Kitchens, Inc. overseeing quality standards, menu writing and recipe compilations for the company’s five Chicago divisions. He spent eight years as the manager and technical advisor for Unilever’s Van den Bergh Foods Company and has consulted for numerous outlets including Starbucks, Lipton Tea and Papa John’s Pizza.

Chef Dodd received his Master Chef and Master Pastry Chef Diplomas from the City and Guilds of London Institute. Her Majesty Queen Elizabeth II awarded Chef Dodd membership to the Most Excellent Order of the British Empire for his laudatory services to the culinary profession. He served more than 20 years in the British Army with eight of those assigned as Special Commitment Chef to the Royal Household, which included designing and creating Princess Anne’s wedding cake and her children’s christening cakes as well as other assignments at Windsor Castle.