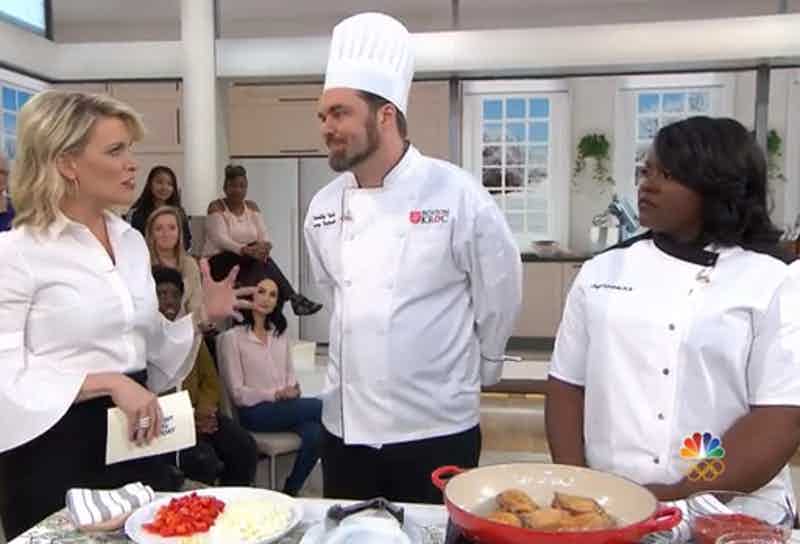 LOUISVILLE, Ky. – Chef Timothy Tucker, a graduate of the Sullivan University’s National Center for Hospitality Studies, will appear as a guest on Megyn Kelly TODAY on Sunday, January 28, to showcase recipes with his former student, Patricia Sujballi-Nesbit.

Tucker’s appearance on the show is a culmination of a remarkable career that has taken him from working in some of the country’s most renowned restaurants to the frozen-food industry and an organic farm to establishing a culinary-arts program for the less fortunate.

Upon graduation from Sullivan University’s culinary program, Tucker, a native of Springfield, Ill., immediately found himself traveling an ambitious career path where he was mentored by top chefs at The Mansion on Turtle Creek in Dallas and The Painted Table in Seattle. Tucker also worked for a brief time as a research and development chef for a frozen-food manufacturer, where he learned much about processed food.

“I was learning firsthand about all the chemicals and additives that go into processed foods,” Tucker said. “While the pay was great, the work was soul-crushing and made me realize how far I’d strayed from my initial passion to cook healthy food from fresh ingredients.”

This realization led Tucker to leave his comfortable job to pursue something more rewarding. He took a job as head chef at Foxhollow Farm, an organic and biodynamic farm community that offers grass-fed beef, fresh produce, and hands-on learning.

“After I learned how food might lead to ill health, I decided I didn’t want any part of it,” he said. “I went off to Foxhollow to learn how to heal.”

During his tenure at Foxhollow, Tucker learned about the process of growing, farming, and cooking organic meals and developed a healthy-cooking philosophy that reshaped his own life and his culinary career.

In 2005, Tucker took a job as Executive Chef at the Salvation Army’s Center of Hope Meal Service in Louisville, where instead of preparing meals for the upscale clientele in fine-dining establishments, he was cooking meals for 400 low-income men, women, and families.

“I loved it – it was obvious to me from the get-go that this service was a necessity for the community,” Tucker recalled. “ But I felt like more could be done.”

Inspired by this notion, Tucker designed an intensive 10-week course that not only taught kitchen skills, but helped people who were living below the poverty line move into a culinary career. Thus, the Salvation Army’s Culinary Arts Training (CAT) program was created.

Students in the program learn knife skills, food terminology, kitchen safety standards, recipes, and effective work attitudes while learning about Tucker’s philosophy of fresh and organic ingredients, which he believes heals the body from the inside out.

Sullivan University Chancellor Al Sullivan said that Tucker’s work inspired him to create a full-tuition scholarship to the university’s Culinary Arts program for one CAT program graduate each year.

“The scholarship has been a beacon of hope for less-fortunate individuals who are looking to break out of poverty and I believe it has helped to continue Chef Tucker’s important mission,” Chancellor Sullivan said.

After starting the program in Louisville, Tucker developed a culinary program at Miami-Dade College and then rejoined the Salvation Army in Boston to implement another CAT program there.

In 2007, Tucker was awarded the Distinguished Alumni Award and the Community Service Award from Sullivan University for his passionate commitment to the less fortunate.

“Through it all, I’ve stayed true to the idea of food as a healing modality,” Tucker said. “Yes, food should taste good, and when you’re cooking with great ingredients and cooking with love, it always does.”