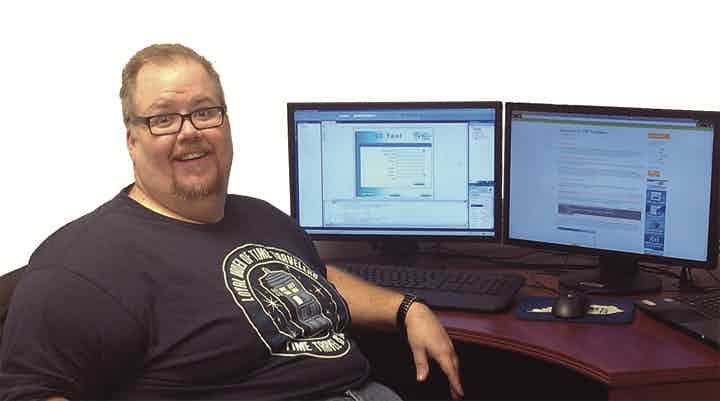 College of Technology and Design
9
1

Webster defines the word career as 1) progressive achievement, and 2) a profession for which one trains and which is undertaken as a permanent calling career. Both definitions describe Kelly Nall’s information technology journey.

A graduate of New Albany High School, Kelly attended a university in another state but did not complete his degree in secondary music education. He migrated from one job to the next, always ending up with some part of his unofficial duties as desktop support for coworkers. Each position he held was more technically oriented than the last.

“One of the companies I worked for went bankrupt. One just ceased business. One was bought out by a larger corporation and the last position I held was migrated to Mexico. In 2010, I found myself out of work again,” Kelly said.

Deciding he needed to receive more education in order further his career and receive pay compensatory for his computer savvy, Kelly researched and visited several other colleges before deciding on Sullivan University.

“I chose Sullivan because the other campuses I visited seemed poorly kept with outdated equipment or sterile and impersonal.”

Although he hadn’t been to college in more than 20 years, Sullivan’s warm and friendly environment helped his transition.

Kelly’s field of study is Computer Science & Information Technology with a concentration in System Design & ApplicationProgramming, which he chose because of his knack for it. “When I was young, my brother owned several small personal computers. I spent entertaining hours typing in BASIC code and running games I’d created. Once I was taught the basics of languages such as PHP, Javascript, and Java, I knew this is what I wanted to do. I enjoy working with and learning more about these programming languages.”

Kelly offered some advice to those who are considering entering the computer science/information technology field.

“Dig in, pick your professor’s brain and ask for more. Each professor at Sullivan has had not only course and book training to impart, but also valuable gems of knowledge related to the field that are not part of the book or listed on the syllabus and course outline. Never stop learning technology.”