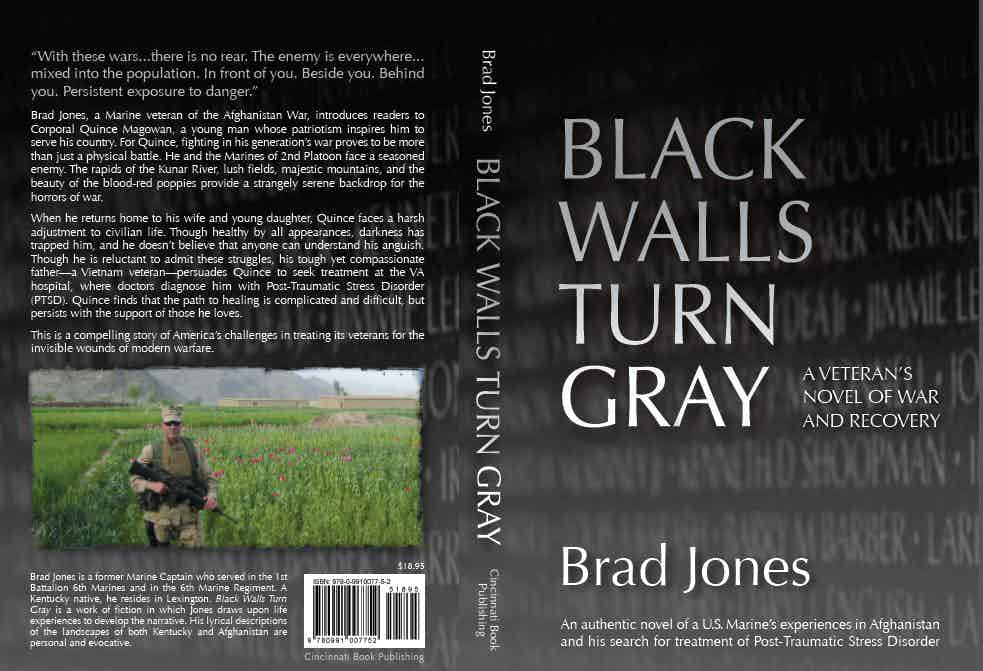 Sullivan University alum Brad Jones wrote a book called Black Walls Turn Gray, a novel about the war in Afghanistan and its effect on our country’s military families. Jones is a veteran of the United States Marine Corps who was deployed in Afghanistan. He is originally from Mt. Sterling, KY and holds an MBA from Sullivan.

He drew upon his real-life experiences when he created this evocative novel about a patriotic farm family who has experienced the traumas of war from Vietnam through Afghanistan. The protagonist is a Kentucky farm boy and college football hero, Quince Magowan, whose patriotism inspired him to volunteer for military service over objections from his wife and father. He is honorably discharged without physical injury, but the horrors he witnessed, especially the death of a combat buddy, leave Quince with devastating invisible wounds.

Back in Kentucky at the Lexington VA Hospital, he is diagnosed with Post Traumatic Stress Disorder (PTSD), a serious psychological condition that stymies his efforts to resume the once-happy domestic life he enjoyed with his lovely wife, Sara, and their baby. Quince’s father, a colorful Vietnam War veteran named Beecher, counsels his son through his troubles.

In this novel, Jones alludes to the impact of combat stress across generations and American military history. Jones will use his book as an educational tool to raise awareness about PTSD. He is available to speak at meetings held by groups, including veteran associations, book clubs, historical societies, and local libraries in Kentucky and Ohio. If you are interested in contacting Jones to arrange speaking engagements for group meetings, you can reach him at blackwallsturngray@gmail.com.

His book is available on Amazon.