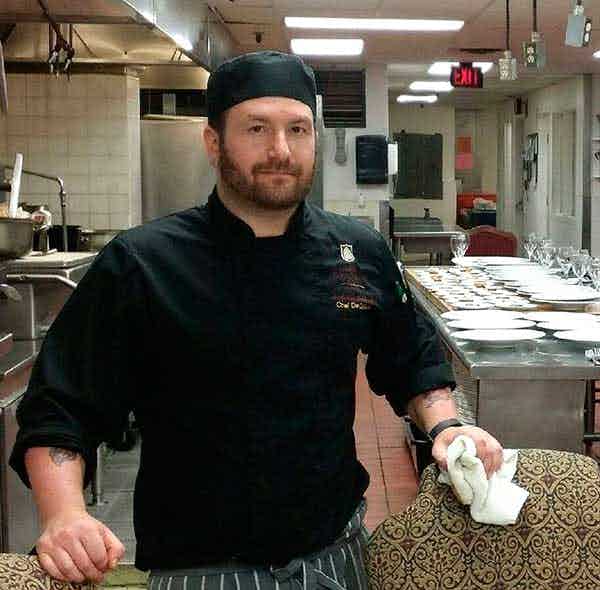 LOUISVILLE, Ky. – Chef Andrew Welenken, a graduate of Sullivan University’s National Center for Hospitality Studies and Executive Chef at La Chasse in Louisville, was recently on The Food Network’s Chopped – a competitive cooking show that has four chefs face off to prepare a three-course meal consisting of an appetizer, entree and dessert.

After each course, a panel of three guest judges “chops” one chef who fails to impress them in terms of taste, presentation and creativity. The last chef standing takes home bragging rights and a prize of $10,000.

However, Chopped also has a unique rule incorporated into the show; in each round, the chefs have to use all the ingredients the show provides them, however unlikely they might be. In Welenken’s case, he had to prepare his first dish with duck tongues.

“My first reaction when I saw them was how the heck does anyone eat them, there was no meat!” Welenken said. “I immediately put one of the tongues in my mouth because I had to see what flavor, aroma, and texture they put off – not much to my surprise they tasted exactly like duck.”

“With 20 minutes in the first round I didn’t have much time to think so I infused a brown butter with the tongues and used it for a sauce for another one of the mystery ingredients, fresh pasta,” Welenken continued. “It worked out great and the flavor of roasted duck perforated throughout the dish. As the tongues cooked in the butter they became very crispy, so I took the tips of the tongues and minced them up for duck cracklings on the top of the dish.”

A native of Elida Ohio, Welenken says that he knew he wanted to be a chef from when he was a senior in high school. After graduating, he worked at a restaurant for a year to make sure it was the right career path for him, and then applied to the culinary program at Sullivan University in Louisville.

“There were a few reasons for me attending Sullivan, the biggest one would be the school’s prestige,” Welenken said. “Another big reason would be that my best friend and I made the move to attend Sullivan together; we motivated each other throughout our schooling and still push each other to this day.”

While attending Sullivan, Welenken says that his education went beyond the job skills needed by a chef and prepared him for career opportunities in a tough industry. Welenken attributes his success in the kitchen to the passionate instructors that eagerly shared their knowledge and professional skills with students.

“To this day it crosses my mind quite a bit that I don’t ever want to disappoint the instructors that taught me by taking a short cut or not giving it my all into something they were so passionate about,” Welenken said. “One day I plan on coming back to Sullivan to teach and pass my knowledge on to future chefs.”

After surviving the first two rounds, Chef Welenken and his lone opponent were given fried sugary dough drizzled with caramel sauce, Saturn peaches, hard cider, and Jordan Almonds. With 30 minutes to produce a dessert that would leave a powerful impression with the three judges, Welenken decided to make bread pudding.

Unfortunately, Welenken’s bread pudding did not impress the panel as much as his opponent, and he was “chopped” in the final round.

“Overall, I felt like I had the two stronger dishes during the competition but its that last dish that needs to be something to remember – and the something I left to remember wasn’t strong enough,” Welenken said. “So I came back to Louisville and put the best bread pudding in the world on our menu, it quickly became the number one seller.”

Although Chef Welenken is glad to be back in his kitchen at La Chasse, he says that he enjoyed the experience of working with the Food Network’s staff, and being a contestant on Chopped.

“Participating on Chopped was amazing.” Welenken said. “I got to the final round and lost to an amazing chef, but I hope I’ll have another chance someday because the experience was a blast! And I know I’ll win.”