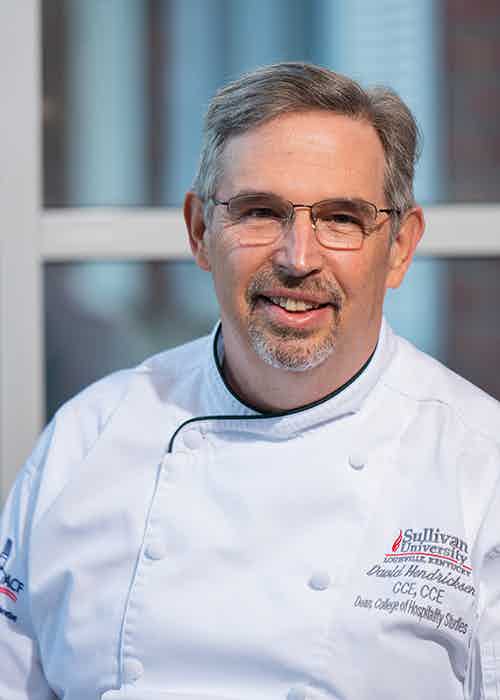 LOUISVILLE, Ky. – Sullivan University has selected Chef David Hendricksen, a veteran of 40 years of experience in the culinary and hospitality industries, as dean of the school's renowned College of Hospitality Studies (COHS).

Chef Hendricksen brings a diverse background in higher education, including holding positions of campus president, executive director of operations, national culinary director and program director. He succeeds Chef David Dodd, who retired this year, and is scheduled to begin at Sullivan June 29.

“Sullivan University has a distinguished history of an exceptional culinary and baking and pastry arts program, as well as hospitality management," said Sullivan University Senior Vice President for Academic Affairs and Provost Dr. Diana Lawrence. "With Chef David Hendricksen’s vast industry and educational experience, as well as his passion for students and faculty, we could not be more delighted to have him assume the Dean of College of Hospitality Studies role. He will be an exceptional addition to the family.”

Chef Hendricksen said he has known about Sullivan's culinary and baking and pastry programs from meeting instructors from the school at culinary conferences.

"I have always been impressed by the academic quality and dedication to the programs by the University Leadership," Chef Hendricksen said. "The faculty I spoke with loved working there and were very loyal. As part of previous jobs, I researched competitive schools and Sullivan University always came up as a top performer."

Chef Hendricksen grew up in Ellington, Conn., observing from a stool as his grandmother cooked in her kitchen and watching legendary television chefs Julia Child and Graham Kerr - who was known as "The Galloping Gourmet" - on public television.

"My grandparents emigrated from France and cooking was a big part of my mother’s family," he said.

While at Johnson & Wales University, he was elected by students at two different campuses as Educator of the Year. He has been a Certified Chef de Cuisine and Certified Culinary Educator for more than 25 years. He directed student and faculty teams at the prestigious James Beard House in New York City, where he oversaw the preparation of Thanksgiving and New Year's Eve dinners for five years.

"I believe that all faculty function as student advisors impacting students’ perception of educational value," he said. "Every minute of student time in class needs to have value. Additionally, learning should and can be fun. It doesn’t just matter if the instructor can do something, it matters that the student can do it as well.”

"I like to end class with 'what is the most important thing you learned today?'," he said. "We are partners with students, sharing a common goal – graduation with a high level of knowledge, skills and employability."

Chef Hendricksen said he enjoys teaching students about sauces and stocks, which he explained are the basis of many dishes.

"I enjoy savory cooking and have a special fondness for seafood," he said. "I helped start The Sustainable Seafood Initiative in Charleston to teach responsible management of our resources. I believe in farm to table and buying seasonal and local."

Chefs that inspire him include Sean Brock, a former student regarded as a top southern cuisine chef, as well as Jacques Pepin, Alice Waters, Herbert Keller and Andre Soltner.

When at home, his favorite dishes to prepare are pizza, risotto and seafood.

"I prepare whatever is available at the seafood market or farmers market," he said.