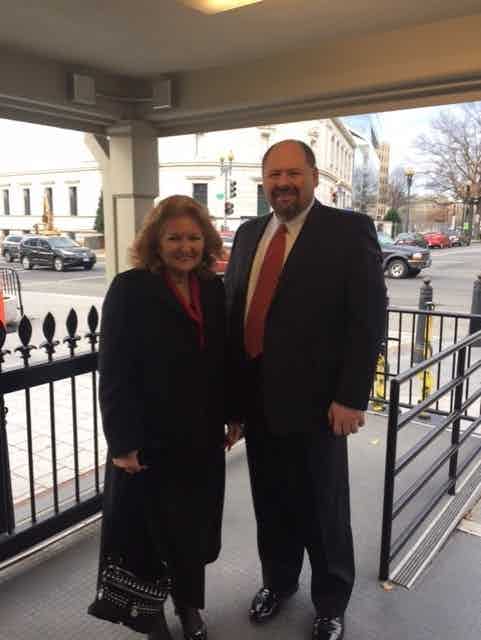 LOUISVILLE – Two of the Sullivan University System’s top administrators visited The White House Jan. 13 to be recognized for the university’s participation in the Obama Administration’s Healthy Campus Challenge.

No other schools from Kentucky attended the event, which recognized the participating schools and featured a panel discussion of Administration officials and education leaders and remarks from First Lady Michelle Obama, who also posed for a group photo with the educators.

The White House Healthy Campus Challenge was launched in September as an effort to enroll more students and young people in the federal Health Insurance Marketplaces established by the Affordable Care Act.

“I was incredibly proud to represent Spencerian College and the Sullivan University System at this White House event,” Gordon said. “Everyone who attended was very energized about working to create a healthy atmosphere on their college campuses, so we were able to share many different ideas and ways that schools have used to assist their students in getting healthier and making sure they have health insurance.”

Dr. Marr said that as Sullivan University CEO “it was an honor to be invited to the White House for a celebration of the Healthy Campus Challenge, and to represent Sullivan University as one of only two institutions attending from the Commonwealth of Kentucky.”

“The Challenge was intended to help students and others learn about and better understand health insurance options available to them,” Dr. Marr said. “Knowing good health is paramount to promoting student success in the classroom, the passion to help students was evident by all those institutions in attendance, and it was an honor to stand with them as each institution was recognized during the event.”

More than 350 campuses from all 50 states, Washington, D.C. and Puerto Rico participated in the Challenge, according to a statement posted on The White House website. Less than a 100 completed the full challenge.

“We can’t wait to congratulate (the schools) for their hard work during the ongoing open enrollment period, hear creative ideas from these schools, and brainstorm ways for them to work together moving forward,” the statement said. “Our hope in holding the Challenge was to institutionalize these enrollment practices on campuses nationwide for future open enrollments.”

Sullivan and Spencerian submitted an application to participate in the Challenge and committed to fulfilling a specific set of open enrollment outreach actions that included:

Gordon and Marr happened to be in Washington just days before the peaceful transfer of power from one administration to the next as President prepares to depart the White House and President-elect Donald J. Trump is getting ready to move in.

“The signs of Friday’s inaugural are everywhere. It’s very exciting and quite eye-opening, a very unique time to be there,” Gordon said. “There are jumbotron screens all along the mall. There is scaffolding and bleachers everywhere. We watched a protest from our hotel. And I’ve never seen so many porta potties in my life!”

“It was exciting and an honor to go to the White House,” Dr. Marr said, “and it’s something I can take off my bucket list.”

Enos Spencer, a nationally recognized business educator of his time, founded Spencerian College in Louisville in 1892, some 124 years ago. The same family of educators that lead The Sullivan University System today have been part of the century old Spencerian for three generations since 1926, with more than 90 years of uninterrupted service to Kentuckiana. This continuity of leadership is unmatched at any college or university in Kentucky. Spencerian College specializes in offering numerous healthcare programs and graduates hold positions in the business, medical, and technical fields all across the United States. Spencerian College opened a Lexington campus in 1997. Spencerian College is nationally accredited to award credentials through the Bachelor degree level and holds numerous programmatic accreditations. For more information visit www.spencerian.edu.

The University offers numerous certificates, diplomas, and degrees in career-orientated programs, ranging from business, pharmacy, human resources, technology, logistics and transportation,management, culinary and baking and pastry arts, hospitality studies, conflict management, nursing, allied health sciences and legal studies. Sullivan University is a part of the Sullivan University System, which includes Kentucky campuses in Louisville and Lexington, an extension in Fort Knox, and The Sullivan University Centers for Learning in Northern Kentucky and Louisa, as well as an online division. For more information, visit www.sullivan.edu.