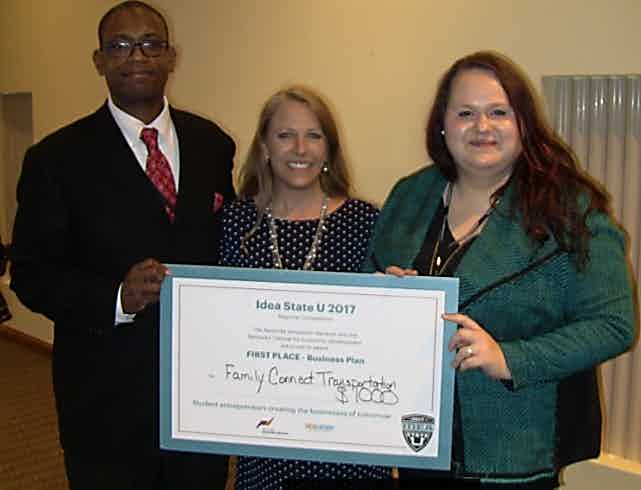 Dr. Terry Kibiloski, Sullivan University faculty advisor for the Idea State University (ISU) Business Venture competition, is pleased to announce that Damon Poke and Rebecca Brock, students at the Sullivan University Lexington campus, won 1st place in the ISU Regional Business Plan Competition held on Wednesday, March 29, 2017 at Lindsey Wilson College, in Columbia, Kentucky. Other colleges and universities competing at this regional competition were Asbury University, Bellarmine University, Simmons College, University of Kentucky, and Union College. This was one of three regional competitions held throughout Kentucky, the other two being held at Owensboro and Prestonsburg. Christine Wildes, State Director at Kentucky Innovation Network, presented the first-place prize of $1,000 to Damon and Rebecca. They will now go on to compete in the Statewide competition on Saturday, April 22nd, for a 1st prize of $25,000.

Damon and Rebecca’s winning business plan described all aspects of their business idea, titled Family Connect Transportation, which will focus on providing low-cost transportation for families of incarcerated individuals to local prisons for prisoner visitations. In the Commonwealth alone there are 38,000 people behind bars and another 70,000 on probation and parole. According to a study published by the Department of Justice, 67% of all released prisoners are rearrested within 3 years. In 5 years that number climbs to 75%. This leads to an inmate population that never stops growing. Kentucky State Prisons and jails are bursting at the seams. They are at roughly 114% capacity.

Family Connect Transportation could help turn this trend around. A study done by the Minnesota Department of Corrections showed that prisoner visitations reduced recidivism, meaning prisoners who have regular visits while in prison are less likely to return to prison once they are released. This is because visitation helps them maintain contact with a support system of people who will assist them when they get out.

Many thanks to Allen Rose, and Representative Dennis Horlander, who were instrumental in helping to arrange a meeting between Damon, Rebecca, and Rodney Ballard, Commissioner of the Kentucky Department of Corrections. The meeting went so well that Commissioner Ballard invited Damon and Rebecca to make a presentation to all prison wardens at a conference to be held in May. The potential for Family Connect Transportation goes far beyond becoming a profitable business, it could make a positive difference in helping to reverse the trend of Kentucky’s increasing prison population, creating a model for others States to follow.

To increase their revenue flow, additionally Family Connect Transportation will provide transportation to assisted living facilities, taking senior citizens on outings to local events, places of entertainment, and shopping areas, to name a few. The company will also provide transportation to tourists, taking them on the Bourbon Trail, to the Derby, Keeneland, ball games, and other seasonal events. While Damon and Rebecca have developed many more ideas for their new venture, those described above were more than enough to with 1st place in the Business Plan competition.

For this Regional competition, Damon and Rebecca were required to create a 60-second marketing video, a 6-page executive summary, and a 15-page detailed business plan, which had to be submitted two weeks prior to the competition. At the competition, they had to have a table top display (shown at left) and make a 15-minute presentation to the judges, who acted as potential investors. They then had to answer follow on questions from the judges. It did not go unnoticed at the competition that Damon and Rebecca were the only team who used a table covering that gave credit to their university. Damon and Rebecca both stated that this was extremely important to them to give back to Sullivan University as thanks for providing this opportunity for them to compete.

Once Damon and Rebecca receive the judges’ comments from the Regional competition, they will have one week to make any changes they desire to their marketing video and business plan, prior to submitting them by April 10th for judging. During the Final Competition, each team will present their tradeshow/exposition tabletop display and give a 60-second elevator pitch; teams will then give their 15-minute oral presentations in assigned rooms, followed by a keynote speaker and the award ceremony.