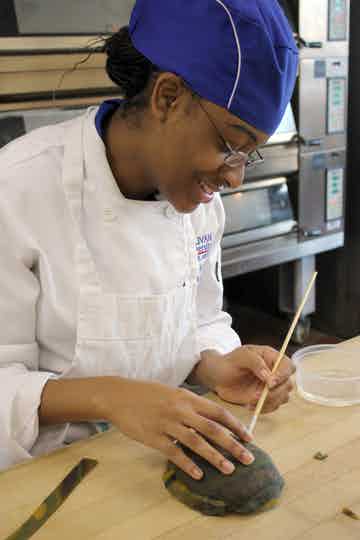 In Chef Becky Woehrle’s Advanced Techniques in Bread class, students use their creative talents to produce and array of bread sculptures using “dead dough” or pate morte. A decorative medium that uses no baker’s yeast, it offers unlimited creative design possibilities. The dough is made by first mixing a sugar syrup, which is then cooled and added to white rye flour and natural food colors. It can be woven, rolled to paper thinness, pressed into molds, cut out in letters or numbers, fashioned in branches, or patterned with overlays of different colors to achieve varying textures.

One student, Mason McCoy from Springfield, IL, said he chose Sullivan because “the chef instructors were very personable”

Mason shows off his finished piece.

Another student, Anihya Singleton, first discovered Sullivan when she attended Culinary Camp in 2012. Anihya, originally from Indianapolis, IN, says, “I absolutely love this class. Chef Woehrle helps us as much as she can. The students are also very helpful. It’s a fun class.”

Anihya works on a turtle, which is will be one part of her finished project.

One of Louisville’s own, Chelsea Mofiz, said, “Sullivan is like a family and I learn a lot of things better hands-on.”

A close-up of Chelsea’s project, “Evolution”

Kaylen Wilkinson came to Sullivan from Columbia, IN and is glad she chose Sullivan. “Sullivan is better than I expected. I love this class. Chef Woehrle is an amazing chef and teacher. I have learned a ton of techniques in bread, cakes and puff pastry. I think earning my degree will make me more marketable in the industry. I plan to cater and own my own bakery. I’m excited about what the future holds for me.”