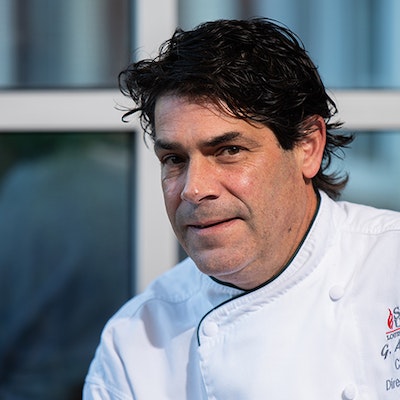 Chef G. Allen Akmon is the Director for the Culinary Arts program at the Louisville Campus. Chef Akmon has been with Sullivan University for 17 years, teaching and administrating on both campuses.

During his tenure with College of Hospitality Studies, he has taught all culinary disciplines in lab and subsequent theory classes and has become a passionate specialist in International Cuisines. Chef Akmon’s culinary education began at the age of 15 as a dishwasher and later prep cook at Giovanni’s Italian Village, a small, family-owned restaurant in Marin County, CA. He graduated from Johnson & Wales University in 1990 with a degree in Culinary Arts. After a promotion to chef de cuisine at The Café at Wexford in Hilton Head Island, SC, Chef Akmon secured employment in Morgins, Switzerland, a small ski village in the Swiss Alps. After one winter season at The Hostelerie Bellevue, he began working at the five-star leading hotel of the world, Grand Hotel Victoria-Jungfrau in Interlaken, Switzerland.

Upon leaving Switzerland, Chef Akmon spent a summer season in Le Lavandou, France on the French Rivera before leaving Europe to spend six months exploring Nepal, India, Thailand, Indonesia, and Malaysia, completed with a full session of Thai cooking instruction at the Oriental Hotel in Bangkok, Thailand. The final destination of this journey was Sydney, Australia, where Chef Akmon worked as the chef de cuisine for Juste Nous, Sydney’s largest catering company.

Just prior to arriving at Sullivan University, Chef Akmon spent five years as executive chef within the Precision Restaurant Group in Colorado Springs, CO. Since arriving at Sullivan University, he has become certifies by the American Culinary Federation (ACF) as an executive chef, a hospitality educator and as an accredited certification examiner. By 2005, Chef Akmon graduated with his Bachelors in Hospitality Management Supervision, and with an MBA and is now pursuing his Registered Dietician degree.

During his time at Sullivan, Chef Akmon has been involved in some unique activities. He has acted on multiple occasions as the private chef to the Ruler of Dubai, Sheikh Mohammed Al Maktoum and his wife Princess Haya of Jordan. He is a consulting expert witness in restaurant legal issues and continues to change the way people eat through his efforts in educating about healthier options through the Harriet B. Porter Cancer Foundation and the Louisville Mayor’s Healthy Hometown Movement. Chef Akmon continues to work annually with Churchill Downs and the Taste of Derby to highlight many Sullivan students who assist celebrity chefs from all over America both on and off campus in the name of hunger relief.