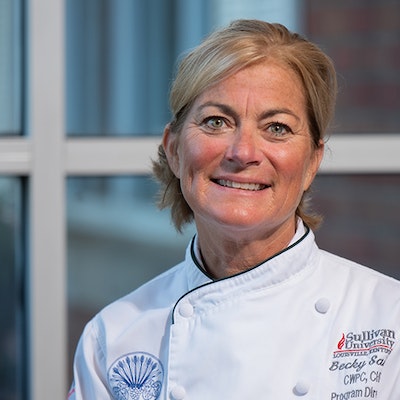 Chef Becky Sams, Certified Working Pastry Chef and Certified Hospitality Educator, is a chef instructor and department chair of the Baking and Pastry Arts Department at Sullivan University’s College of Hospitality Studies (CoHS) in Louisville, KY. She is a member of the Kentucky Chapter of the American Culinary Federation (ACF), Les Dames d’Escoffier, Women Chefs and Restaurateurs and the Bread Bakers Guild of America.

Chef Sams was born and raised in Louisville. She worked as an advertising account manager in San Diego, CA for four years after receiving her bachelor’s degree from the University of Florida in Gainesville.

She returned to Louisville and worked as a baker for La Peche/Lilly’s Restaurant. Her passion for baking compelled her to study baking and pastry arts. She entered Sullivan University’s Baking & Pastry Arts program and continued to work for Kathy Cary at Lilly’s and LaPeche until she earned her degree in 1996.

After receiving her Associate of Science Degree in Baking & Pastry Arts, Chef Sams created, owned and operated Divinity Catering, specializing in fine desserts. She spent five years running Divinity before selling it to raise a family.

Chef Sams returned to Sullivan in 2003 to teach Baking Fundamentals and Advanced Techniques in Bread and now chairs the Bakery and Pastry Arts Department. She also serves as a New Student Mentor. In addition to her teaching responsibilities, Chef Sams has represented Sullivan University at the annual Food Educator’s Network International Conferences, Regional ACF meetings, and the Bread Bakers Guild Camp Bread 2005.

Chef Sams was one of three instructors and 22 students chosen to assist Framboise Catering of Staten Island, NY to cater for the United States Delegation during the 2008 Summer Olympic Games in Beijing, China. She was once again chosen to lead the baking team for the 2010 Winter Olympic Games in Vancouver, Canada.