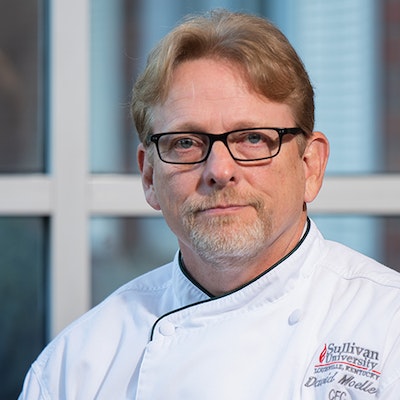 Prior to his employment at Sullivan University, Chef Moeller began his culinary career in 1981 working for the Grisanti Company, a group of three restaurants specializing in fine dining, Northern Italian cuisine and regional American cuisine. Chef Moeller worked for the Grisanti Company in all kitchen positions until 1986 when he was hired as chef tournant at Vincenzo’s, another fine dining restaurant in Louisville. In 1988, Chef Moeller moved to Providence, RI to pursue a degree in Culinary Arts from Johnson and Wales University, which he completed in 1989. In addition to attending culinary school full-time, Chef Moeller worked full-time as a pastry chef at Michael’s Gourmet, one of the largest catering houses in Providence.

Having completed his Culinary degree, Chef Moeller returned to Louisville as chef de cuisine at Jack Fry’s, until being lured back to Vincenzo’s where he worked as chef de cuisine until his appointment as chef instructor at Sullivan University. In 1996, he opened Winston’s Restaurant, a three-and-a-half-star restaurant on the Sullivan University campus. There, Chef Moeller served as executive chef.

In 1997, Chef Moeller moved to Chicago, IL to work as executive chef of Bistrot Zinc, an authentic French bistro in the heart of the city. Then he made the decision to return to Louisville and Sullivan University.

Chef Moeller’s work has been featured in several publications such as Chef Magazine, Southern Living and Chicago Magazine, and he has also appeared on many local television news stations, demonstrating his talent and love of the culinary profession.