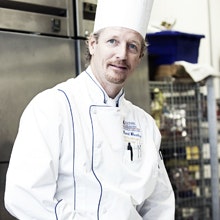 Chef David Wheatley got his start as a volunteer at a church picnic in the mid-1990s and got a rush from the pace and the atmosphere of cooking and serving so many people. After that, he volunteered to help with other events, which led him in his current direction and to his passion for cooking and the culinary industry. He worked at Allstars Sports Bar and Grill and was promoted to lead cook in the first month. A couple of years later, he became owner and executive chef of his own restaurant, The Jukebox.

While in the business, he attended Sullivan University and earned an Associate’s Degree in Culinary Arts and Baking & Pastry Arts, graduating with honors in both. While attending Sullivan, he earned four silver medals in competition, was the American Culinary Federation (ACF) Kentucky Chapter Student Chef of the Year and the Kentucky Restaurant Association (KRA) Student Chef of the Year. He has also won two silver medals and one bronze medal in professional competitions. He was sought out to produce and plate food items for Kentucky Monthly Magazine and was a featured chef.

Since then, he has started Chef2B4U Catering Company, worked as a chef with Farm to Fork Catering Company, which uses fresh from the farm ingredients to help grow the Kentucky small farms community, and worked events with Juleps Catering Company. Chef Wheatley held the position of executive chef at Grasshopper Distribution Company, where he designed and produced recipes from products from local farms. He opened Doc Crow’s Smokehouse & Raw Bar in downtown Louisville, KY on Whisky Row. Chef Wheatley has worked as a teaching assistant and became the culinary tutor at Sullivan University. He was invited to be a consultant and evaluator to the culinary team members at Prosser Vocational School in Indiana, where three of the team members won medals. Chef Wheatley has also been involved with the FCCLA as a competition judge for high school students looking to grow and join the culinary field. Chef Wheatley is also a coach and mentor for the competition team at Sullivan University.