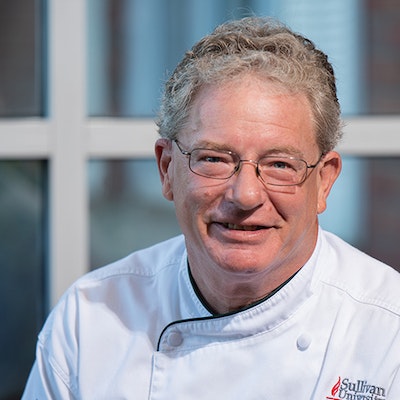 Chef Eugene Bell is presently a full-time member of the College of Hospitality Studies (CoHS) at Sullivan University. Although most of his culinary education has been through the “school of hard knocks,” He holds an Associate degree in Culinary Arts and a bachelor’s degree in Hospitality Management, both from Sullivan University. He currently instructs classes in Basic Skills, Garde Manger, Food and Beverage Cost Control and Purchasing. Along with his duties as a faculty member, he is also one of the coaches for the Sullivan University hot food competition team.

Chef Bell accumulated better that 25 years in the hospitality industry prior to accepting his teaching position at Sullivan University. Most recently, he was an executive chef for Dupree Catering, Inc. in Lexington, KY. Prior to this position, he was the executive chef for Ala Carte Food & Wine, a retail, deli and catering operation in Indiana.

His studies in architecture and computer science at Ball State were well utilized at the University of Evansville, managed by Sodexho Management Services, and at the University of Southern Indiana, managed by Marriott Education Services. He was the executive chef and unit project manager at both locations, where he oversaw renovation projects of $3 million at the U of E dining hall and an $11 million renovation of the student Union Building at USI, including the foodservice areas, cafeteria, food court, and banquet and catering facilities.

Chef Bell owned his own consulting business where he worked with small independent owners form blueprint to full service operations, performed research and development with International Food Design and managed Dairy Queen and Boston Market, along with other national chain operations, wholesalers and retailers. Chef Bell spent 14 years in the private club industry with Club Corporation of America and independent country clubs, including the Petroleum Club, Springfield Country Club and Lexington Country Club. He holds a Les Amis d’Escoffier Honor Medallion for a Gold Medal, 14 courses, Les Amis d’Escoffier dinner, two Chef Professionalism awards from the Bluegrass Chefs and Cooks Association and American Culinary Federation (ACF) and the ACF Kentucky Chapter. Chef Bell was a founding member and held the positions of secretary/treasurer in the Tri-State Chefs and Cooks, ACF; secretary/treasurer and president in the Bluegrass Chefs and Cooks, ACF; and vice president, president and chairman of the board in the Kentucky Chapter of the ACF.

Chef Bell participated as local talent for cooking shows in Lexington with the “What’s Cooking at Randall’s” series. He also appeared as the weekly morning chef on WKYT, Evansville, IN. He has made numerous appearances on local media and has been featured in and written articles for local and regional publications including Food & Dining, Louisville Business First, Midwest Foodservice News, The Lexington Herald Leader, The Culinary Review, and The Evansville Courier and Press.