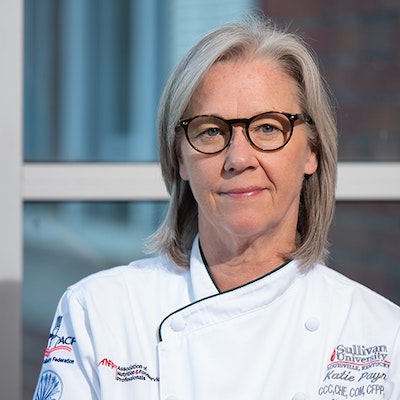 Chef Katie Payne currently serves as chef instructor at Sullivan University’s College of Hospitality Studies (CoHS). Chef Payne teaches International Cuisine and at times Basic Culinary Theory and Lab. Her restaurant career began in Lexington, KY in the mid-1980s, where she held several positions in the front of the house. There, she was exposed to fine dining, where her curiosity and interest in food preparation and presentation became a priority.

She is a graduate of the Culinary Arts program at Sullivan University’s CoHS. As a student, she was chosen to participate on the CoHS's nationally acclaimed culinary competition team. She was awarded the bronze medallion for her efforts during Sullivan’s first-time venture into hot food competition. While completing her course work, she served as a teaching assistant and held the position of sous chef at the three-and-a-half stars Winston’s Restaurant.

Upon leaving Sullivan, she began a two-year stay at the Inn at Blackberry Farm, one of the United States’ top-rated resorts. She began as a breakfast/lunch prep cook. Her first experience at this level of culinary style and presentation was extremely demanding and rewarding. From Blackberry Inn, she moved to a position at Caneel Bay Resort in St. John, U.S. Virgin Islands. There she served as chef de partie at Turtle Bay, the resort’s exclusive fine dining restaurant.

Immediately prior to assuming her teaching position at Sullivan, she served as executive chef in charge of the Home Meal Replacement division at Phil Dunn’s Cookshop in Lexington.