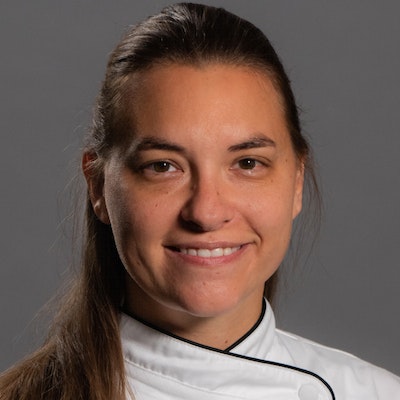 Chef Lindsey Cook began her culinary career working in her hometown of Hamilton, Ohio. At 14 years old she obtained a dishwashing position. While attending high school she also began working as a car hop at Jolly’s, local eatery, a bakery at Jungle Jim’s international market and eventually worked her way up to a line cook position at a classic Italian restaurant, Josephina’s. These experiences led to her decision to attend culinary school.

She attended Johnson and Wales University in Charleston, South Carolina. There she earned her Associates in Culinary Arts and a Bachelor’s in food and Beverage Management. While in Charleston she worked at several restaurants as a line cook, made fresh pasta at a pasta company, served, and cooked for Meritage catering company and assisted in baking at a local German Bakery. After years in the kitchen, she opted to study front of the house services while working as a host and eventually front of house manager for the Jasmine Porch at the Sanctuary on Kiawah Island.

These collective industry experiences brought about the opportunity for Lindsey to begin her restaurant consulting career in Charlotte, North Carolina. While there she worked with entrepreneurial groups as a Director of Operations to open several restaurants, bars, and a dinner theater. Lindsey attended Strayer University while in Charlotte. She obtained her Master’s in Business Management Administration.

Lindsey moved to Cincinnati to teach at The Art Institutes of Ohio-Cincinnati as a chef instructor. She taught for several years at that location before transferring to the AI in San Diego. In San Diego she also worked as a private event chef for a local wine shop, where she customized food and wine menus for visiting wineries and wine makers. Lindsey attended Argosy University to begin her Doctorate of Education in Organizational Leadership. She later moved back to Ohio to teach again at AI Ohio-Cincinnati. While in Ohio she opened her own catering company and worked part time as a personal chef. Her catering company, The Jaded Fork, partnered with Findlay Market to offer cooking classes at Findlay Kitchen, the city’s first incubator space. It was here she began to develop the curriculum for The Findlay Culinary Training Program, which began accepting students through a partnership with Citylink. Lindsey was the Director of Education of FTCP for several years before the program shut down due to the pandemic.

During the pandemic, Lindsey relocated to Jeffersonville, Indiana, and began teaching at Sullivan University in 2021. She really likes teaching the Skills level classes! She still runs her catering company out of Cincinnati and is looking forward to enjoying more culinary experiences in Indiana and Kentucky.