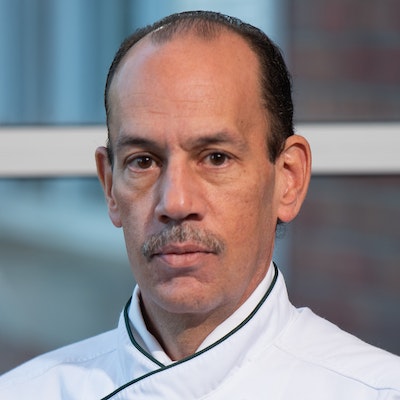 Chef Mike Cunha, B.S., CEC, CHE, is a Chef Instructor at Sullivan University's College of Hospitality Studies (CoHS) in Louisville, KY, and has 30 years of industry experience prior to joining Sullivan. Chef Cunha holds an Associate degree in Culinary Arts and Baking & Pastry Arts, along with a Bachelor's degree in Foodservice Management, from Johnson & Wales University.

Prior to his employment at Sullivan University, Chef Cunha was an operating partner/ Executive Chef at Limestone Restaurant in Louisville and Mike & Jimmy's Chophouse in Crestview Hills, KY. Before that, he was Executive Chef de Cuisine at the Oakroom at the Sealbach Hotel, Kentucky's only AAA five-diamond rated restaurant. In his career, Chef Cunha has participated in three James Beard House Dinners, along with one event at the Marriot Marquis Hotel in New York, one event at the Peabody Hotel in Memphis TN, and one event at the Brown Hotel in Louisville.

Chef Cunha's work has been featured in various publications such as Louisville Magazine, Southern Living, Wine Spectator, USA Today, Business First, Food Arts and Nations Restaurant News. Chef Cunha has taken an active role in the community working with the March of Dimes, Hospice Care, the Home of the Innocents, the Family and Children First Foundation, and the Salvation Army Culinary Program.

Chef Cunha was awarded the 2011 Chef Educator of the Year award from the American Culinary Federation (ACF) Kentucky Chapter, of which he is a member. He is also a member of the advisory board of the Salvation Army in Louisville, Kentucky.