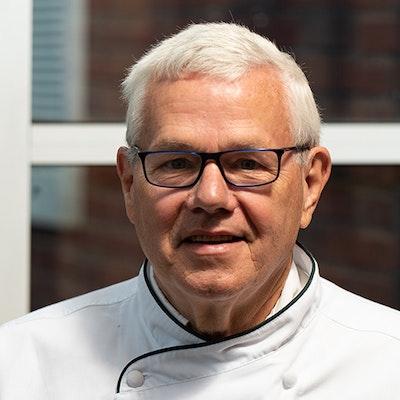 Chef Mudd, a Louisville native, has worked at some of the city’s finer hospitality establishments including the opening of the Galt House Hotel; serving as first executive chef at the Executive West Hotel (now Crown Plaza); and working as the executive chef at Hunting Creek Country Club. Chef Mudd has also ventured into his own entrepreneurial pursuits, operating an off-premise catering firm and brokering restaurant equipment. As a founding member of the local American Culinary Federation (ACF) chapter, he served as treasurer for five years and president for three years. His peers recognized him as:

Chef of the Year in 1981 and 1983 Recipient of the 2009 Hermann G. Rusch Award for exemplary achievement and continuing dedication to culinary arts

Culinary Educator of the Year in 2010 In the early 1980s while holding down a chef’s position, he got his first taste of teaching culinary arts at the Kentucky State Reformatory, offering inmates an opportunity to learn a trade and enter the workforce when released. This led to part-time teaching stints at Jefferson Community College and Northwood Institute. As a full-time chef instructor with Sullivan University’s College of Hospitality studies (CoHS) since 2000, he taught Basic Culinary Skills, Garde Manger, Foodservice Purchasing, Food & Beverage Cost Control and Catering. Chef Mudd has a 10-year history of service with the Salvation Army and has served as a member of their advisory board. Since its inception, he has worked to promote the Salvation Army’s Culinary Training Program, teaching classes, planning curriculum and providing teaching materials. This initiative has led to the participation of many other Sullivan chefs in the program and the university’s sponsorship of a Culinary Arts scholarship every 18 months for a deserving member of the Salvation Army program. In 2007, Chef Mudd was awarded Sullivan University’s Community Service Award for years of dedication and belief in helping the less fortunate in the community. Working as a full-time instructor at Sullivan beginning in 2000, he taught Basic Culinary Skills, Garde Manger, Food & Beverage Cost Control, Purchasing, and Catering, retiring in 2019. He plans to stay active promoting Sullivan’s culinary program by participating in local high school competitions and skill development demonstrations.