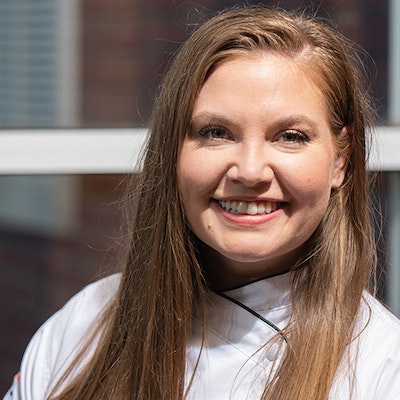 Chef Whitney Fontaine is an Adjunct Culinary Instructor in the College of Hospitality Studies (CoHS).
Chef Fontaine started her career by earning a Food Service degree from Purdue University. Upon graduation, she moved to Covington, GA to be a Quality Engineer for General Mills, managing the packaging line for Big G Cereals. She returned to Louisville in 2008 to take a product development position at Paradise Tomato Kitchens. At Paradise, she developed new products, commercialized them to large scale production, served as a food law and labeling expert and was part of the team to open a new manufacturing in Los Banos, Ca. Chef Fontaine developed many sauces that are currently on the menu at many restaurant chains around the country. She then moved to Brown-Forman as a member of the Research & Development team, working mainly on international lines, with one notable exception domestically — The current flavor profile of the Old Forester Mint Julep Bourbon. During her time at Brown-Forman, chef Fontaine became one of the first people in the world to sit for, and pass, the Certified Food Scientist Exam.

After leaving Brown-Forman, Chef Fontaine attended Sullivan University to earn her culinary degree. During her time at Sullivan, she won several culinary competitions and earned an ACF silver medal with the culinary team. Additionally, she was invited to NYC to cook as part of the Pellegrino Almost Famous Chef Competition.

She is honored to be back at Sullivan as an instructor. She is thrilled to bring both her culinary and food science knowledge to the students and absolutely loves teaching.