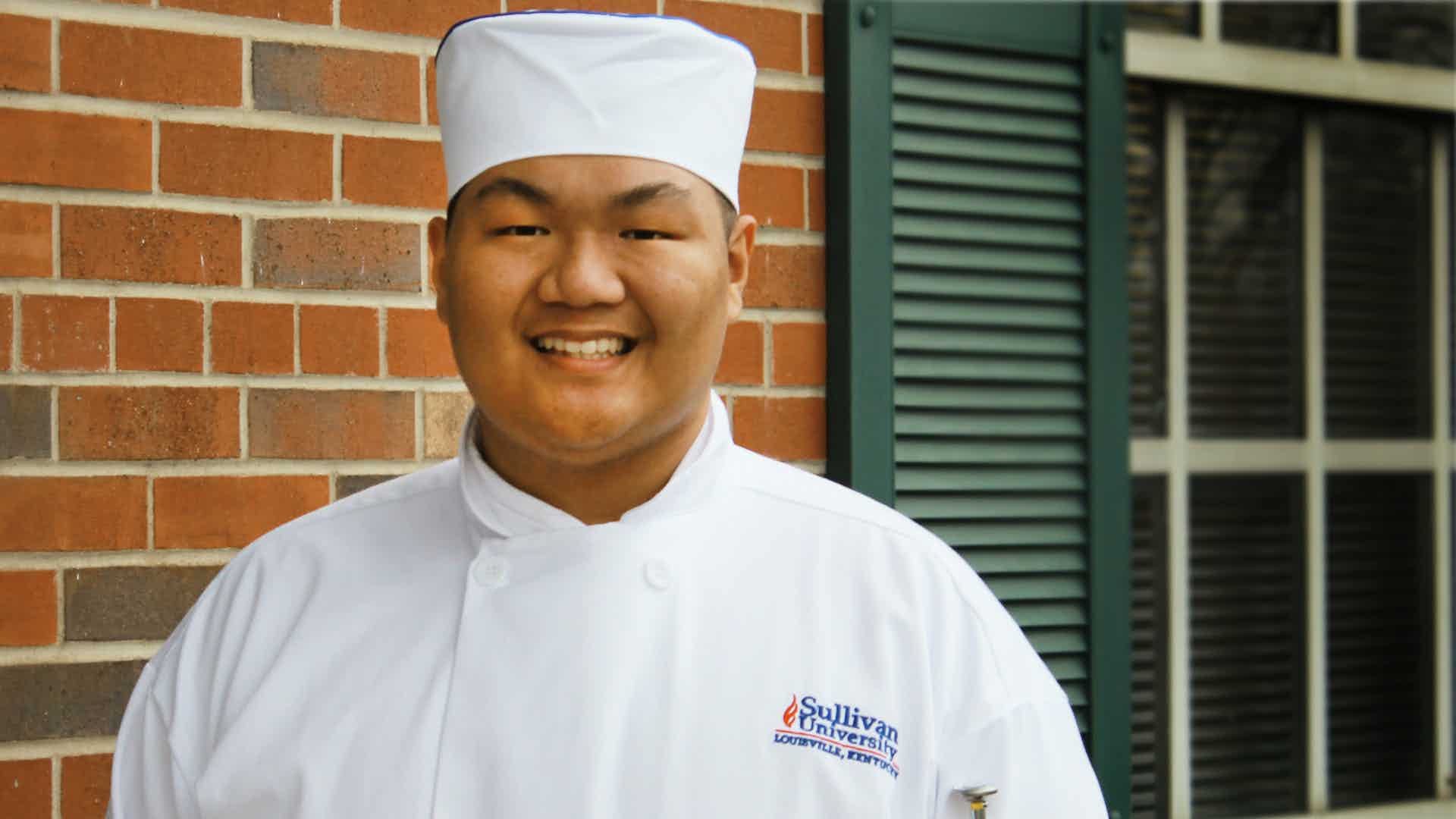 But if you’ve never seen or experienced a snowfall – like Hawaiian native Jacob Pagdilao, a freshman studying in Sullivan’s renowned culinary and hospitality program – a little winter weather is something to eagerly anticipate.

“The average temperature of Hawaii during the winter is 85 degrees,” said Jacob, 18, who grew up on the Island of Oahu. “Moving to a place that sees temperatures that go as low as 20 degrees and lower made me feel excited, since I might get to experience snow. When I found out I would be going to Kentucky during the winter, I had to get an entirely new wardrobe, from the pants, sweaters, jackets and shoes.”

Jacob is spending plenty of time in the warmth of Sullivan’s kitchens, honing the skills he gleaned from the culinary program he joined as a sophomore at James Campbell High School in Ewa Beach, Hawaii, and as a gold medalist in competitions sponsored by Family Career and Community Leaders of America, or FCCLA.

“I became obsessed with FCCLA, running as a state officer and becoming FCCLA Hawaii’s first vice president for the 2018-19 school year,” Jacob said. “That same year, I competed in a competition category called Food Innovations. I ended up taking top gold at our state competition alongside my partner, Franchesca Tano.”

The duo went on to take gold in the Food Innovations competition at the 2019 FCCLA National Leadership Conference, which earned him a full tuition and fees scholarship to Sullivan.

“I could not pass up such an amazing opportunity to receive culinary education at one of the top culinary schools in the nation,” Jacob said. “I had heard a little about Sullivan University and it’s accredited culinary program. It is known as one of the top hospitality/culinary schools in America and has a reputation for having acclaimed professors that have years of real-world experience and awards.”

“It really sparked my interest and excitement. And, it would give me an opportunity to travel and experience an entirely different state and meet new people,” he said. “But if it wasn’t for the opportunity from FCCLA and Sullivan, I never thought I would actually be attending school here.”

Jacob’s award-winning dish at the FCCLA nationals was a salad using what he and his partner felt were the best ingredients from where they came from – Maui onion dressing, fried Maui onion strings, Hawaiian smoked meat and pineapple salsa.

“The smoked meat was a toast to my partner’s childhood, as her family would always make smoked meat at their family’s annual camping trips,” he said. “I wanted to highlight Maui onions because growing up, we had this potato chip flavored with Maui onion, and eating that would instantly take me back to my days at the beach as a child.”

“I also cook a lot of traditional Asian cuisine that my parents or grandparents taught me,” he said. “Dishes like adobo, meat jun, kalbi, Kalua pork, japchae, chicken katsu and so on. Overall, I enjoy experimenting with all types of recipes whether I leaned it from my high school class or the Internet.”

After he graduates, Jacob’s goal is to work at a well-established restaurant under an acclaimed chef “where I can continue to master my skills and move up the ranks,” he said.

“I want to express my gratitude to the people at Sullivan University for giving me this life changing opportunity, where I get to explore my passion alongside other determined and caring students,” Jacob said. “I also want to thank all the staff and chefs who have helped me feel comfortable despite being 4,000 miles from home.”