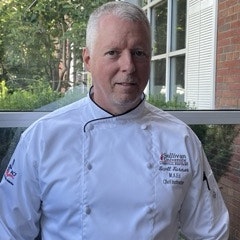 Chef Turner's career in foodservice began in equipment installation and repair on the East Coast. Seeing the Chef’s in the kitchens having more fun than he was, he decided to go to culinary school where he received exceptional training and knowledge in Culinary Arts and Baking and Pastry primarily under the guidance of his mentor, Certified Master Pastry Chef Walter "Spud" Rhea. He has participated in regional culinary competitions and most recently Pastry Live in Atlanta GA. During his career, Chef Turner was awarded both gold and silver medals in competition by the American Culinary Federation. Additional training has included time spent with Chef Ewald Notter in the study of chocolate, sugar, and pastillage.

Early in his career, Chef Turner worked in some of the finer restaurants in Louisville and Lexington and in the role of Executive Pastry Chef for the Westin Casuarina Resort on Grand Cayman Island. After returning from the Caribbean, he designed and built his own upscale restaurant in LaGrange, Kentucky. Chef Turner's hard work and passion paid off through the success of the restaurant. Eventually, the decision was made to sell the business and in March of 2001, Chef Turner was invited to come to Sullivan University as a Chef Instructor where a new passion was realized through teaching.

While at Sullivan, he was afforded the opportunity to teach in both Culinary and Baking but found his true passion within the Baking and Pastry Program where he taught and helped develop all classes within the curriculum. His primary emphasis, and true passion, is in chocolate. While at Sullivan he became the Associate Chair for the Baking and Pastry Arts Program, helped coach the Culinary Competition Team, and mentored the medal winning individuals and team that competed in Erfurt, Germany for the IKA Competition.

After fourteen years with Sullivan, he was asked to build a new Culinary Arts Program for Hardin County Schools (EC3) in Elizabethtown, KY. The development became a strong partnership between Hardin County Schools and Sullivan University. After two years and the successful program startup, which included catering and a direct program link for students to continue at Sullivan with transfer credits, he ventured back out into the industry.

Upon returning to the industry, Chef Turner worked as an Executive Chef for an acute care hospital, a Corporate Executive Chef for Eurest Dining overseeing eight locations producing corporate fine dining, and as a Chocolatier for Butchertown Grocery Bakery in Louisville, KY. Most recently, Chef Turner found himself with a unique opportunity to work as a Consultant and Chef for Ashbourne Farms in LaGrange, KY and The Haymarket, Louisville, KY. Chef Turner’s passion for teaching was reborn while working with Ashbourne Farms as students from a local high school culinary program were often on-site for events. They reminded him of what he felt called to do, teach. When the opportunity revealed itself, he made the decision to return to teaching at Sullivan University in June of 2022.

Chef Turner earned his Undergraduate Degree in Psychology and a Master’s Degree in Education through Ottawa University in 2012. He enjoys spending with his family and looks forward to his continued journey with Sullivan University, College of Hospitality Studies.